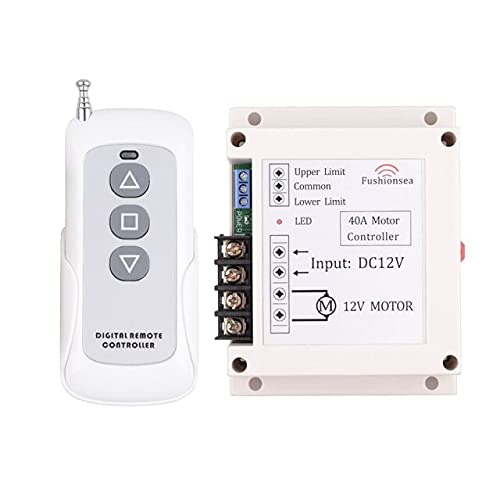 About Receiver:
Working Voltage: DC12V
Max Load: 40A Relay  (have better load less than 400W)
Size: 115*95*40mm
Encoding Type------ Learning Button to add Transmitter
Original State OFF, (Suddenly, the electricity was cut off, then comes again, the State still is OFF, you need manual turn it ON)
About Working way:
Working Mode:  Momentary  Latched adjusted by DIP Switch
( we ship default as Latched, if you need use Momentary to change DIP Switch on the Receiver )
Momentary---------Switch turn to“M"
Latched-------------Switch turn to " L"
Momentary -------------
Press button"Up", the Motor Forward, Release is Stop.
Press button "Down", the Motor Reverse, Release is Stop.
Latched------------------
Press button "Up", the Motor Forward, Press button "Stop" is stop.
Press button "Down", the Motor Reverse, Press button"Stop" is stop
When the receiver output state is “Latched”, we have set it 2S time delay for forwards and reverse, it is the Protection function.
About External Manual Function:
How to wire to your External Manual Button (if you need)
Forward ---------S2 amp; GND
Reverse ----------S1 amp; GND
Stop---------------Stop amp; GND
About Limited Switch Function:
Limited Switch use UP,DOWN and COM+ Terminal ,Your limited switch connect COM and NC .（Limited Switch is not included )
If you don’t need wire the Limited Switch, you need connect the UP Down and COM with a Line, we have connect it before we ship out ,if you need use it take away the line that is ok.
About Learning Code:
1. Press the learning button on the receiver for 1 time,the learning indicator ON,Then press the transmitter button up for 1 time (first button default for forward) ,the learning indicator flash 2 times and ON,It mean the first button learning Successfully
2. Then press the transmitter button down for 1 time (second button default for reverse) ,the